The recent reopening of a border crossing between Israel and Syria holds the hope of stability as the Syrian war draws to a close. But if Iran, Hizballah, and allied radical Shi’ite militias have their way, Syria will be hijacked and turned into a radical Iranian power projection base. Any hopes for stability would then give way to destabilizing conflict, terrorism, and new threats to Israel and Jordan. 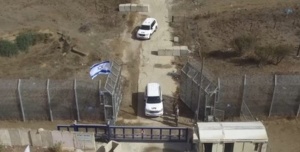 The Israel Defense Forces (IDF) announced last week that the Quneitra border crossing between Israel and Syria, shut down in 2014, is back in operation.

Before the Syrian civil war’s outbreak, members of the Golan Heights Druze community – which identifies itself as Syrian, unlike the Israeli-Druze community – used the crossing to attend family celebrations in next-door Syria, export apples, and to study at Syrian universities.

All of that fell apart during the bloody years of the Syrian war. The Assad regime’s sovereignty in southern Syria, like many other areas of the country, collapsed, the UN fled, and armed groups overran the area.

Some parts of southern Syria came under the control of extremist Islamic State-affiliated forces, while other areas were ruled by more moderate Sunni groups. Other pockets of land were held by the Assad regime, with the assistance of pro-regime militias that Iran helped to set up and arm.

Now, southern Syria is officially back under Assad’s control, and the UN is returning to the border. The Syrian Arab Army (SAA) has retaken the area, and this has allowed Israel to reopen the Quneitra crossing. These developments suggest a new stability, but the reality isn’t as simple as putting the chess pieces back in their original positions. The Syria of 2018 – or what is left of it – is not the country that it was before the war, for it has been thoroughly infiltrated by Iran and its proxies.

Iran has played a major role in the war that led to an estimated 500,000 deaths, and which displaced half of all Syrians, most of them Sunnis. Now that Iran’s client, the Assad regime, has emerged as the victor, Tehran is looking to ‘cash in its chips,’ and build itself a war machine in Syria.

One of Iran’s goals is to set up a network of terrorist cells to attack Israel from southern Syria. Such cells would be able to attack with border bombs, shoulder-fired missiles, ballistic rockets, and cross-border raids. They could aim for both Israeli military and civilian targets. It is a goal that Iran has already tried to realize in the past, and failed. Iran has also tried to build missile bases, drone bases, weapons production sites, and other installations throughout Syria, an effort that was thwarted by Israel. Iran has flooded Syria with militant Shi’ite militias that it recruited from across the Middle East, trained, and armed, giving it access to its own army.

Throughout the war, Syria became an active Iranian military zone. Assad’s role was essentially reduced to granting Tehran permission to further entrench itself. Assad had little choice in the matter, as the Iranian assistance he received on the ground, combined with Russia’s air power, saved his regime from destruction.

Hizballah – Iran’s forward division in Lebanon – remains active throughout Syria as well. Although Hizballah has begun withdrawing forces back to Lebanon, its chief, Hassan Nasrallah, recently signaled that some of his personnel will be remaining in Syria. “No one can force us out of Syria,” Nasrallah said in September. “We will stay there until further notice.”

Iran’s Islamic Revolutionary Guards Corps (IRGC), together with its international operations unit, the Quds Force, are also staying put. They have played a critical role in assisting the return of Assad’s army to southern Syria. The IRGC has planned operations and injected Iranian-controlled militias into the SAA’s offensive.

Israeli defense sources have confirmed the presence of embedded Shi’ite militias among the returning SAA forces.

This year already provided a glimpse into Iran’s future plans for the region. In May, the Quds Force used a truck-mounted rocket launcher to fire projectiles at Israel, following a string of reported air strikes against Iranian bases in Syria.

“Numerous reports indicate that the Iranian forces, Hizballah, and the Shi’ite militias participated in the fighting in southern Syria dressed in Syrian army uniforms so as to disguise their presence there,” the Middle East Media Research Institute said in a July report.

Russia’s vow to keep Iranian forces 85 kilometers away from the Israeli border does not appear to be a long-term arrangement on which Israel can depend. Russian President Vladimir Putin said last Thursday that it was not up to Russia to convince Iran to pull out of Syria.

U.S. lawmakers and security observers have expressed growing concern over Iran’s plan of entrenchment in Syria. The dangers posed by Iran projecting its radical power onto Syria are becoming increasingly difficult to ignore.

The wider picture, then, is that Iran’s takeover efforts continue to cast a dark shadow over Syria’s future, as well as the security and stability of the wider region. Jordan is as threatened by the presence of Iranian-backed Shi’ite militias on its borders as Israel, due to Iran’s hostile intentions toward this pragmatic Sunni kingdom, which maintains a peace treaty with Israel, and which wishes to have no part in Tehran’s attempt to become a regional hegemon. Jordan has nothing to gain and much to lose if Iran succeeds in turning the region into a staging ground of extremist armed forces that answer to the Islamic Republic.

Jordan blocks the expansion of Iran’s regional influence, and is threatened by the presence of Iranian-backed Shi’ite militias in both Iraq and Syria. Jordanian commentators have previously warned that the country is prepared to take military action if necessary to push away Shi’ite militias from its border with Syria.

Jordan’s King Abdullah has, for his part, warned years ago about the formation of a Shi’ite crescent in the Middle East.

Iran has not given up on its objective of building a war machine in Syria, both through its own forces, and through its numerous terrorist proxies.

As long as Iran remains committed to using Syria this way, Israel will feel compelled to defend itself. The result is a region that is never far from a potential escalation.

“Even today, Israel is acting against Iran in Syria, and we will continue to try and push it back,” Israeli Prime Minister Benjamin Netanyahu said on Oct. 15. Netanyahu spoke after concerns were raised that Russia would seek to limit Israel’s actions.

While the opening of the Quneitra crossing is a welcome and hopeful step, which expresses an Israeli effort to promote stability in the area, it remains far from clear whether Iran will allow Syria to enjoy such stability.

Yaakov Lappin is a military and strategic affairs correspondent. He also conducts research and analysis for defense think tanks, and is the Israel correspondent for IHS Jane's Defense Weekly. His book, The Virtual Caliphate, explores the online jihadist presence.