In late fall 2018, the U.S. Embassy in the Netherlands was informed Wreaths Across America wanted to extend the holiday-season tradition of placing wreaths on the graves of U.S. service members to the World War II Netherlands American Cemetery at Margraten.

As the U.S. ambassador to the Netherlands at the time, I, along with my team, was thrilled by this opportunity. We accepted the invitation and had a beautiful experience honoring those who had died in the service of our great country.

It is why I feel a personal obligation to respond to reports a group is attacking this tradition in hopes of stopping it from taking place at our national cemeteries around the world.

The American Cemetery at Margraten is a special place where more than 10,000 Americans are remembered and honored. Every single grave in the cemetery has been adopted by a Dutch family. Some graves have been adopted by the same family for going on four generations now. The families visit their adopted graves throughout the year, and on special occasions like Memorial Day, they will present flowers.

The embassy staff greets the adopters as they bring their flowers and pay their respects at the grave sites on Memorial Day weekend. Some of the adopting families have reached out to the American families of their “soldier” and formed close bonds.

A young Dutch man started a program called, “The Faces of Margraten.” It is an effort to get a photo of every American remembered at Margraten. This effort in a few short years has gathered 8000 images. Once every two years these photos are placed on the graves a poignant reminder that every one of the markers represents a real American soldier. 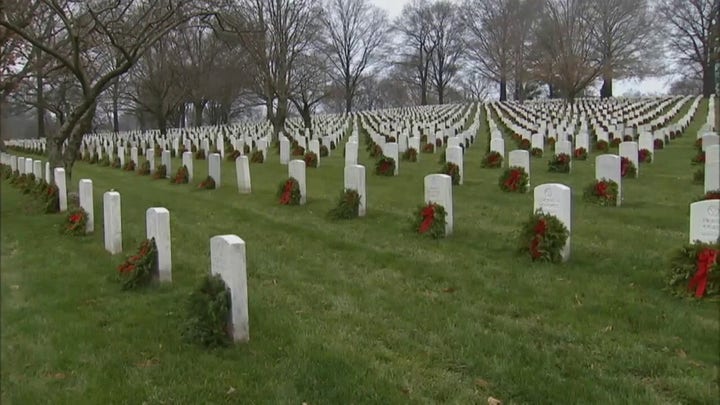 Margraten is a place that brings Americans and our host country citizens together to remember those who sacrificed their lives for America and the liberation of Europe. The adoption program and the Faces of Margraten campaign just strengthen those bonds. Wreaths Across America would do the exact same thing.

The laying of 10,000 wreaths seemed like it would be a monumental task. However, when we arrived on a cold Saturday morning to lay the wreaths, we were once again overwhelmed by the support of our Dutch friends. Hundreds showed up to help distribute the wreaths, and after a short program, the process of laying the wreaths began.

The volunteers would take a wreath, stand solemnly at a grave, respectfully place the wreath and step back, wait a moment and then say out loud the name on the marker, and then slowly move away. It was a beautiful and moving experience to participate in and behold as it occurred all across the cemetery.

There were so many Dutch volunteers to join the embassy team and me that placing all the wreaths in Margraten took less than 30 minutes. Days later when the wreaths needed to be removed, volunteers again arrived in large numbers to help make the effort quick.

After we finished laying wreaths at Margraten, we held a smaller ceremony in the Dutch town of Opijnen. In the dark of night, my wife, Diane, and I, along with local townspeople laid eight wreaths in a small cemetery where American airmen are buried. The story of Opijnen is a story unto itself, but I am proud to say that on that day, we laid wreaths on all the grave sites of Americans buried in the Netherlands.

Attacking Wreaths Across America and their activities is a wrong. As I experienced in the Netherlands, honoring the sacrifices of those who served is not only the right thing to do, it builds strong bonds between us and our allies at the grassroots level. Individuals and families on their own have created this special bond with Margraten, making it not only a special place for Americans, but also a special place for the Dutch as well.

Wreaths Across America is a wonderful effort to express our appreciation for the sacrifices made by so many for the freedoms we have today. As I reflect on standing among those thousands of markers at Margraten, and the eight at Opijnen, my vision is that every grave site across America, and around the world, will have a wreath this and every year.

This column was originally published in The Washington Times

Pete Hoekstra is a former Representative in Congress from Michigan. He is a former member of the CCNS. He served as the Chairman of the House Intelligence Committee. More recently he was the U.S. Ambassador to the Kingdom of the Netherlands.