President Trump’s decision to pull U.S. funding of the World Health Organization (WHO), pending an investigation, is justified based on both their recent record of covering for China’s role in the COVID-19 pandemic, as well as for their track record over the past decade and beyond. But by announcing his decision this week, Trump is walking into a media buzz saw, certainly not for the first time.

The media have a huge conflict of interest, which they won’t even acknowledge. They are planning to broadcast a massive TV event this weekend, basically a fundraiser for the WHO, that will keep their news divisions from honestly reporting on the controversies, even if they were inclined to do so, which they are not.

The idea of a fundraiser to help healthcare workers and victims of the virus is perfectly appropriate and worthwhile, but the funds that it raises should not be funneled through the WHO, an organization steeped in controversy that is currently headed by someone with an ignominious record. They should find other beneficiaries, such as the Red Cross and others listed here and here, though I am not endorsing any of them specifically.

One obvious problem is that by promoting and airing this high-profile benefit, it means that those networks will not investigate or report on the very issues that make the WHO so controversial. That was the case even before Trump weighed in this week with his decision to withhold aid.

Deadline describes the event as such:

“Jimmy Fallon, Jimmy Kimmel and Stephen Colbert are to host a major television event to help end COVID-19 airing across NBC, ABC and CBS as well as a number of international networks.”

“The trio will front One World: Together at Home featuring a slew of A-list stars on Saturday April 18 between 8pm and 10pm. The event, which is curated by Lady Gaga, has been put together by social action platform Global Citizen and the World Health Organization.”

“The global entertainment special will celebrate the efforts of community health workers and promote the fight to end the global pandemic. It will feature multimillion-dollar pledges to the WHO’s Solidarity Response Fund.”

The show includes an all-star, A-list line-up, including Stevie Wonder, Andrea Bocelli, Paul McCartney and Elton John, among many others.

Who could object to any of that? Well, if you’re aware of the political leanings of the three hosts, you’ll understand that this will likely be, at least in part, a blatant attack on President Trump. Stephen Colbert, for example, delivers the goods five nights a week on CBS, dishing out witless hatred and mockery of President Trump and his family, plus he has a weekly animated show on the Showtime cable network where he reaches for and finds new lows in attacking the Trump family.

And it’s not just on those three American broadcast networks that this event will be shown. According to Deadline:

“In addition to NBC, ABC and CBS, it will air on BBC One as well as Disney, NBC and ViacomCBS stations around the world. The full list of broadcasters includes Bravo, E!, MSNBC, NBCSN, NBC News, NBC News on YouTube, Peacock, Syfy, USA, ABC News, ABC News Live, Freeform, Nat Geo, Channel 5 in the UK, Network Ten in Australia, and Telefe in Argentina, BET and MTV globally across more than 180 countries, CMT, Comedy Central, Logo, MTV2, Paramount Network, Pop, TV Land and VH1 in the US as well as Bell Media platforms in Canada, MultiChoice, and Ireland’s RTE.

With most of the world homebound, this has the potential to be one of the most watched programs in TV history.

What is it that the WHO has done to disqualify itself from the sort of adulation it will be receiving that evening?

The basic charge is this, from a Wall Street Journal column: “Under Mr. Tedros’s leadership, the WHO has accepted China’s falsehoods about the coronavirus and helped launder them into respectable-looking public-health assessments.

“On Jan. 14, before an official WHO delegation had even visited China, the group parroted Beijing’s claim that there was ‘no clear evidence of human-to-human transmission.’ Two weeks later, after China had reported more than 4,500 cases of the virus and over 70 people in other countries were sick with it, Mr. Tedros visited China and heaped praise on its leaders for their ‘transparency.’”

“Mr. Tedros” is the director of the WHO, Dr. Tedros Adhanom Ghebreyesus.

There is much more detail, dating back at least to early December that covers much of China’s actions and deceptions, and the WHO’s willing and negligent participation. It is laid out very well in this timeline from Fox News, and this one from the Daily Mail.

And the condemnation of both China and the WHO is not just coming from conservatives. Leftwing publications such as The Nation and The Guardian have harsh critiques of both. The Nation, takes the WHO to task for ignoring Taiwan’s warnings about the true situation in Wuhan, such as the transmissibility of the virus from human to human.

From the Guardian, “The WHO is ignoring Chinese government suppression of human rights regarding the outbreak, including severe restrictions on freedom of expression. In turn, Chinese state media are citing the WHO to defend its policies and try to silence criticism of its response to the outbreak, which has included rights violations that could make the situation worse.”

And from the libertarian Reason magazine website, “The World Health Organization (WHO) put out questionable guidance on how to deal with the coronavirus, it was slow to communicate the magnitude of the threat, and it whitewashed the Chinese government’s early handling of the crisis.”

There is an excellent column by Marc Thiessen in The Washington Post which argues that China should be legally liable for the trillions of dollars and the many tens of thousands of lives lost in this coronavirus pandemic. And there is a class action lawsuit that lays out the complaint in legalistic and timeline form of what the Chinese government knew and when they knew it.

The networks carrying the show on Saturday are not asking the tough questions of the WHO, if Chuck Todd’s questioning of the organization’s number-2 man on NBC’s Meet the Press is any indication. It is an inherent conflict of interest when news and entertainment are residing under the same roof, such as, for example, ABC and Disney, NBC and Comcast, CBS and Viacom. They will almost always come down on the side of their entertainment assets. Especially in cases like this when it also fits their political narrative, which is that if Trump is for it, they are against it.

U.S. contributions to the WHO have been by far the largest of any country, approximately $3.5 billion over the last decade. But what’s even more significant is that in some cases, 80% of the amount the U.S. contributed was voluntary, as opposed to the assessed portion. For example, in 2017, $401 million out of the total of $513 million from the U.S. was voluntary, and the total was approximately 10 times that of China. The figures have been similar to that for the past two years as well. 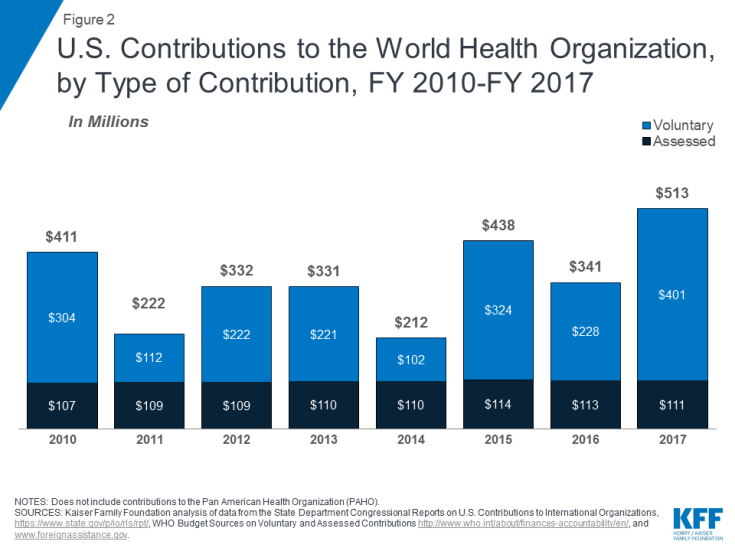 There are many other problems with the WHO that suggest it needs to be reformed or scrapped. The money from the U.S. should still be directed to fighting diseases like malaria, polio and AIDS, and helping front-line healthcare personnel, but not through the WHO as it currently exists.

There have been previous controversies and problems involving the WHO, which I will discuss in part 2 tomorrow.

Roger Aronoff is the executive director and Editor of the Citizens Commission on National Security. Aronoff founded the Citizens’ Commission on Benghazi. He has produced and directed six documentaries, and produced a weekly series on PBS called “Think Tank with Ben Wattenberg.”