It is important to repeat something I wrote in an earlier Gateway Pundit article: In the People’s Republic of China, there is no difference between military and civilian research centers.

Chapter 78 of the Chinese Communist Party’s Thirteenth Five-Year Plan (2016-2020) describes the fusion of military and civilian research including the area of “synthetic biology.”

From the publications of China’s leading research scientists, “synthetic biology” appears to include biological warfare.

Many also underestimate the potential contributions of Chinese veterinary and agricultural research to such a military program.

He is also a senior officer in China’s Peoples’ Liberation Army. 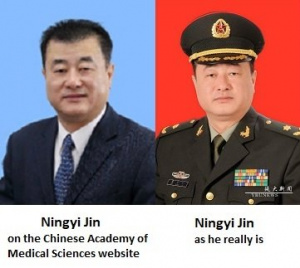 In one scientific publication, Ningyi Jin lists himself as a faculty member of Wenzhou and Guangxi Universities. In another publication, he affiliates himself with Yanbian University.

More alarming, however, is Ningyi Jin’s attitude toward zoonotic research.

Zoonotic diseases are caused by germs that typically spread from animals to humans. That is, by definition, it is a naturally occurring event.

Ningyi Jin, by contrast, sees zoonotic diseases in terms of biowarfare or bioterrorism, where the use of biotechnology can transform a natural zoonotic pathogen in order to “greatly increase its lethality, offensive power, and toxic effects.”

That opinion is expressed in the preface of a book called “The New Edition of Zoonoses” written by Ningyi Jin in 2007.

Ningyi Jin’s viewpoint is not an isolated one, but a common theme that runs through many Chinese military publications.

The time is long past for the U.S. government to take a far more serious look at the Chinese Communist Party’s biowarfare program, their joint civilian-military research institutions supporting it, the laboratory origin of COVID-19, and the U.S. scientists and federal funding that may have contributed to it.

Preferably, this will be done before another more lethal COVID-19 appears.