This missive will be a short and to the point, and a clarion call to constitutional conservatives in Texas. In the military they teach us to build our battle plans around the enemy’s most dangerous COA – – course of action. The great thing about the progressive socialist left is that we do not have to guess what their COA is, and their intent. They are now so emboldened that they willingly say so.

As reported in The Hill:

“Democratic National Committee (DNC) Chairman Tom Perez on Wednesday declared Texas a battleground state and said the national party intends to compete there in 2020, from the presidential level on down. “We strongly believe that Texas is a battleground,” Perez said at a breakfast hosted by the Christian Science Monitor, arguing that Trump’s rally in Dallas last month signals that the president is on the defensive in the Lone Star State.

“This president is underwater in Texas. The poll I saw him in a month ago has the generic Democrat ahead of the president in the general election by something like 5 points. (We shared a recent poll from this week where that has changed). That’s why he was there. It’s remarkable that this president has to spend time in states like Texas, and I think we can compete.”

Several surveys of Texas released this year have found Trump running neck and neck with the top Democratic White House hopefuls, although a Texas Tribune survey from October found Trump with a 5- point lead over the closest Democrat. Trump carried the traditionally red state by 9 points in 2016, which was the worst showing for a GOP presidential candidate in 20 years.” 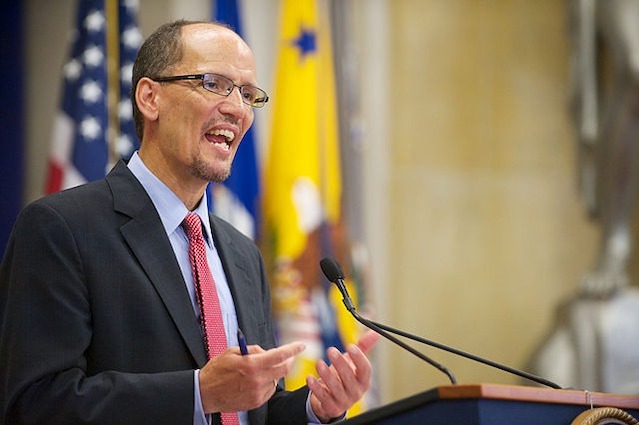 The progressive socialist left is highly energized after their win in Virginia. Just think about it, the state that gave us our first Commanding General and president, author of the Declaration of Independence and third president, and author of our US Constitution is now run by progressive socialist leftists whose ideological agenda is antithetical to our fundamental and founding principles and values. I, for one, never want to hear the left talk about racism and #MeToo. Especially since they just gave control of the state to the party of “black face” and an alleged rapist.

And now, these delusional leftists have set their sights, and acclaimed that next year it is Texas for which they are focused. The left spent some $15M dollars to gain control of both chambers of the Virginia state legislature…amazing. They even elected a woman whose whole claim to fame was that she “flipped off” President Trump’s motorcade while riding her bicycle…for which she was fired from her job.

“Democrats are also eyeing power at the Texas state House, where they need to flip nine seats to claim a majority. “I think we have a real shot at taking over the House of Representatives there, in addition to competing in the federal races,” Perez said.

“Our partners at the Democratic Congressional Campaign Committee, they already have a field office in Texas because they correctly believe, and I couldn’t agree with them more, there are six opportunities now. There could be more coming up because Texas is a remarkable potential opportunity.”

The Democratic gains in Texas have largely been driven by domestic migration. Drawn by Texas’s booming economy, hundreds of thousands of new voters have resettled there from more liberal states, such as California, New York and Illinois.

Many have settled in the suburbs, where Trump’s support is eroding, helping to make the metro areas around Houston, Dallas, Austin and San Antonio some of the fastest growing in the country.

But changing demographics are also making Texas a bit more purple, and Perez said the party is heading into the state with an eye on Latino voters, noting that 800,000 more Latinos voted in 2018 than in 2014 and that Texas has 3.5 million eligible Latino voters who did not cast ballots in the past election.

“[Republicans] can’t compete on the merits for Latino votes, for African American votes, or Asian American votes, so they’re trying to make it harder for them to vote … that’s why we’re so invested in those communities,” Perez said.”

I have been talking about this for quite some time, most recently this week in pieces entitled, “We’re Outta Here.”

This battleground in which we find ourselves in Texas is not a mirage, it is real. And I am tired of those who dismiss this and say…well, Gov. Greg Abbott won overwhelmingly. Well, Gov. Abbott’s opponent was a serious chucklehead. And in that same election cycle with Gov. Abbott, last year, we saw 12 Texas State House seats lost, two Texas State Senate seats, 2 US Congressional seats, and 56 judge positions. Not to mention, this past Texas legislative session was not exactly one to write home to conservatives about.

The challenge has been issued, just like when the Mexican cavalry showed up at Gonzales Texas on October 2, 1835 demanding their cannon back. DNC Chairman Tom Perez is now demanding the State of Texas…and our response must be, mine certainly is, “Come and Take It,” Tommy boy.

Heck, I look forward to debating Perez next year sometime after the May Texas GOP State Convention in Houston.

This article was originally published at The Old School Patriot.

Allen West is a retired Lieutenant Colonel in the United States Army. He served in Operation Desert Storm and Operation Iraqi Freedom, receiving many honors. In 2010, West was elected as a member of the 112th Congress representing Florida’s 22nd District. He is a Fox News contributor, author of “Guardian of the Republic," and a Member of the Citizens Commission on National Security.