Iran’s brave protesters have taken into the streets again, but they don’t just risk bullets, imprisonment, torture and execution from the Islamic Republic’s repressive forces. They are also being ignored by the Western mainstream media. Worse still, Facebook and Instagram have been removing footage of their protests as well as blocking hashtags relating to the protests that can generate and attract larger engagements.

The recent protests in Iran, which started May 12 in the oil rich province of Khuzestan, against soaring price increases, have quickly spread to other cities and morphed into a full revolt against the regime. 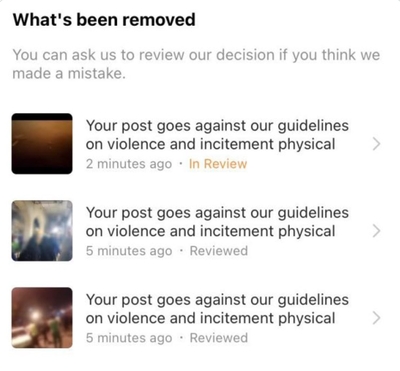 Islamic Republic authorities have resorted to their usual counter measures, which include shutting down the internet to prevent footage of the protests and the crackdown on demonstrators from going viral. This time the Iranian authorities have a new partner in silencing the protests, the Big Tech companies, Instagram and Facebook in particular.

Instagram and Facebook moderators have decided chants of “Death to Khamenei,” or even footage of protesters on the streets violate their guidelines.

Below are some screenshots sent to me by people who tried to post footage of Iran protests on their Instagram accounts.

They have also shut down accounts that post protest videos. Facebook and Instagram’s silencing of Iranian protesters has outraged opposition activists. They see the Big Tech companies knowingly or unknowingly helping the religious dictatorship in Iran.

Prominent Iranian-American women’s right activist Masih Alinejad who has been targeted for kidnapping by the Iranian government due to her opposition, is one of those furious at the big tech collusion with Iran. 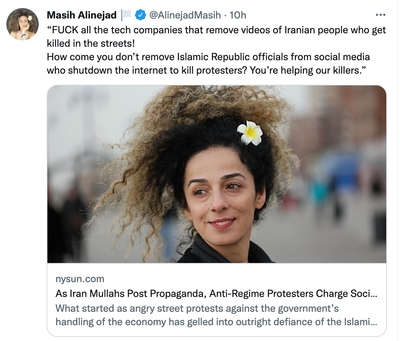 Further investigation by opposition activists outside Iran into why the posts about Iranian protesters were censored led to a company in Germany.

Facebook and Instagram, both owned by Mark Zuckerberg’s Meta, have outsourced moderation of Persian posts to the German-based Telus International. The company has around 500 Persian-speaking employees who moderate and fact-check Persian content on these social media platforms, BBC Persian found.

In a program that aired on Tuesday, some Telus International employees talked to BBC Persian under the condition of anonymity.

“There are many in this company both in the lower ranks and even in the higher ranks who openly say they support the regime in Iran,” said one Telus employee, identified with the pseudonym Mehdi.

“Many of the employees in the company are Iranian students who travel to Iran, where they are trained and instructed on which posts should be removed,” a former Telus employee said.

“Only 10 percent of the complaints are referred and reviewed by higher levels in the company,” an employee identified as Ali said. “And even in the few instances where the decision to remove the post is overturned, there are no consequences for the employee who originally removed it wrongfully.”

Persian speaking media outlets outside Iran which oppose the Islamic Republic face similar uncertainty and restrictions on their social media posts. Even Radio Farda, which is funded by the U.S. government, has had its posts removed or even faced a shadow ban.

“The problem is, you never know what will happen when you post something,” a senior Radio Farda social media staffer told me. “Once a post is removed, you don’t know who to approach. And if you face a shadow ban, it could take months to resolve the situation, while you lose millions of engagements on the contents you post. We have tried talking to policy makers and advisers in these companies but to no avail.”

Popular Iranian political satirist, Salome Seyednia, who has more than 1 million Instagram followers, receives thousands of videos from citizen journalists in Iran every day. But Instagram already has warned her that her account could be taken down after she posted previous protest videos. 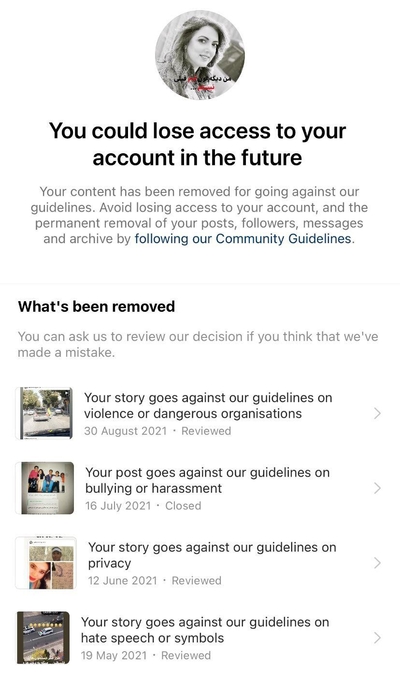 Telus International and Meta so far have not commented on the BBC Persian investigation.

Meanwhile Iran’s officials including Supreme Leader Ayatollah Khamenei, continue to use these platforms to their full extent and unabated.

People risking their freedom, and even their lives, to speak out against their government are being silenced on the world’s largest social media platforms. Meanwhile, the people responsible for their oppression still are free to foment hatred.

Despite several articles published in the mainstream media, human traffickers continue to advertise their services, such as fake and stolen passports, on Instagram, yet the company’s moderators seem more keen on silencing the Iranian protesters.