Smoking guns, designed mutations, and the U.S. government cover-up of the laboratory origin of COVID-19

If you are wondering why U.S. intelligence agencies are incapable of identifying the origin of COVID-19 and why the U.S. government shows no interest in pursuing that issue, wonder no more.

There is a deliberate cover-up underway because the rich and powerful multi-national interests that control the U.S. government are massively invested in China’s economic success and many U.S officials and scientists could be accused of complicity in the creation of COVID-19.

The scientific recipe for the laboratory creation of COVID-19 was described in the 2018 research grant application to the U.S. Department of Defense’s Defense Advanced Research Projects Agency (DARPA) “Project DEFUSE: Defusing the Threat of Bat-borne Coronaviruses” submitted by Peter Daszak of the EcoHealth Alliance and his primary co-applicants Zheng-Li Shi of the Wuhan Institute of Virology, Ralph Baric of the University of North Carolina and Linfa Wang of Duke University-National University of Singapore, a Chinese scientist who also worked at the Wuhan Institute of Virology.

In the same year, all the applicants participated in The 8th International Symposium on Emerging Viral Diseases in Wuhan, China, October 21-22, 2018. 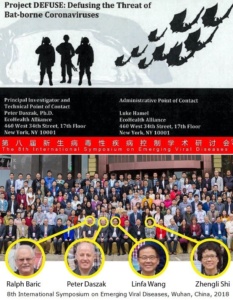 The application was ultimately rejected by DARPA because it involved dangerous “gain of function” experiments creating new human-infecting viruses and the potential for dual use as a bioweapon.

DARPA, however, left the door open for partial funding and it is very likely that experiments were already ongoing in the laboratories of the principal investigators at the time the application was submitted.

The research proposal explicitly states that bat coronavirus samples, collected in southern China by the Wuhan Institute of Virology, would be isolated and genetically sequenced in Wuhan, in particular, the spike proteins, which is the binding element initiating infection.

In follow-up experiments conducted by Zheng-Li Shi of the Wuhan Institute of Virology and Linfa Wang of Duke University-National University of Singapore, spike proteins demonstrating “high risk” for human infection would be artificially combined with other bat coronavirus “backbones,” creating entirely new and potentially dangerous coronaviruses, which would then be tested for human infection by Ralph Baric of the University of North Carolina.

Another “smoking gun” for the laboratory origin of COVID-19 is the presence of the furin polybasic cleavage site in the virus (PRRA).

It is a four amino acid sequence, which does not exist in any of hundreds of close bat coronaviruses relatives from which COVID-19 could have evolved.

The enzyme furin is ubiquitous in the human body and it has long been known that the presence of furin polybasic cleavage sites in viruses facilitates viral entry and replication in human cells, thereby increasing transmissibility and pathogenicity.

The presence of the furin polybasic cleavage site can also help explain why the COVID-19 virus can attack multiple human organ systems.

As stated in a May 18, 2021 Gateway Pundit article, the artificial insertion of the furin polybasic cleavage site into a bat coronavirus backbone was likely done under the supervision of Shibo Jiang in coordination with his military-trained colleague Shuwen Liu and others at the School of Pharmaceutical Science, Southern Medical University, Guangzhou, China.

It is important to note that the furin polybasic cleavage site inserted in the COVID-19 virus may have been designed to mutate into a more contagious and pathogenic variants, like the presently dominant Delta variant.

The initial proline (P), having an unusually rigid structure, first mutated in March 2021 to histidine (H) as the UK variant.

The new, reportedly highly contagious Omicron variant from South Africa, among other mutations, has a proline to histidine mutation in the furin polybasic cleavage site.

Unless the true origin of COVID-19 is rapidly addressed, the world not only faces the possibility of another man-made pandemic, but the complete destruction of science as an honest and objective discipline