Secretary of State Antony Blinken keeps advising Israel to retreat from the mountain ridges of Judea and Samaria (the West Bank), lest it lose its Jewish majority.

Secretary Blinken is wrong, relying on highly-inflated, erroneous Palestinian Authority numbers, ignoring the dramatic Westernization of Arab demography, and overlooking the unprecedent Jewish demographic tailwind in Israel, as documented by the following data.

*The fertility rate (number of births per woman) of Israeli secular Jewish women has trended upward during the last 25 years, while ultra-orthodox women have experienced a slight decline.

*Israeli Jewish women – who are second only to Iceland in joining the job market – are unique in experiencing a rise of fertility rate, along with expanded urbanization, education, standard of living, integration into the job market and a rise of wedding age, while these phenomena have lowered the fertility rate in all other countries.

*Since 1995, the demographic trend has expanded the younger segment of Israel’s Jewish population, which provides a solid foundation for an expanded Jewish majority in the coming generation.

*Moreover, there is a potential of at least 500,000 Olim (Jewish immigrants) in the next 5-10 years – awaiting the Israeli government to leverage this potential – when considering the Jewish communities in France, Britain, the former USSR, Germany, Argentina, as well as the USA, Canada and Australia.

*350,000 East Jerusalem Arabs, who possess Israeli ID cards, are doubly-counted. They are included in the Israeli census, while they are also included in the Palestinian census. The number grows daily due to births.

*Over 100,000 Arabs from Gaza and (mostly) from Judea and Samaria, who married Israeli Arabs and received Israeli ID cards, are doubly-counted counted: by Israel as well as by the Palestinian Authority. The number expands daily because of births.

*A 32% artificial inflation of Palestinian births was documented by the World Bank (page 8, item 6) in a 2006 audit. While the Palestinian Authority claimed an 8% increase in the number of births, the World Bank detected a 24% decrease.

*A dramatic decline in the fertility rate from 9 births per woman in the 1960s to 3.02 births in 2021 is documented by the CIA World Factbook, which generally echoes the official Palestinian numbers. It reflects the Westernization of Arab demography in Judea and Samaria, which has been accelerated by the sweeping urbanization (from a 70% rural population in 1967 to a 77% urban population in 2021), as well as the rising wedding age for women (from 15 years old to 22), the substantial use of contraceptives (70% of women) and the shrinking of the reproductive period (from 16-55 to 23-45).

*The number of Arab deaths in Judea and Samaria has been systematically under-reported (for political power and financial reasons), as documented by various studies since the British Mandate. For example, a recent Palestinian population census included Arabs who were born in 1845….

*Secretary of State Antony Blinken should derive much satisfaction from the aforementioned documentation, which demonstrates the demographic viability of Israel – America’s top force-multiplier in the Middle East and beyond.

*In contrast to conventional wisdom, there is no Arab demographic time bomb; there is, however, unprecedented Jewish demographic tailwind. 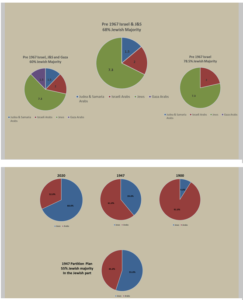 This column was originally published at The Ettinger Report.

Yoram Ettinger is a former Israeli diplomat, expert on US-Israel relations and the Middle East.