Expressions of grief, shock and solidarity came from all corners Saturday and Sunday as a horrified nation learned about a Jew-hating gunman’s attack on a historic Pittsburgh synagogue.

Eleven Jews were killed because they were Jews, gathered for Shabbat services at the Tree of Life synagogue. Four Pittsburgh law enforcement officers were wounded as they raced toward the gunfire and prevented the tragedy from being even greater. 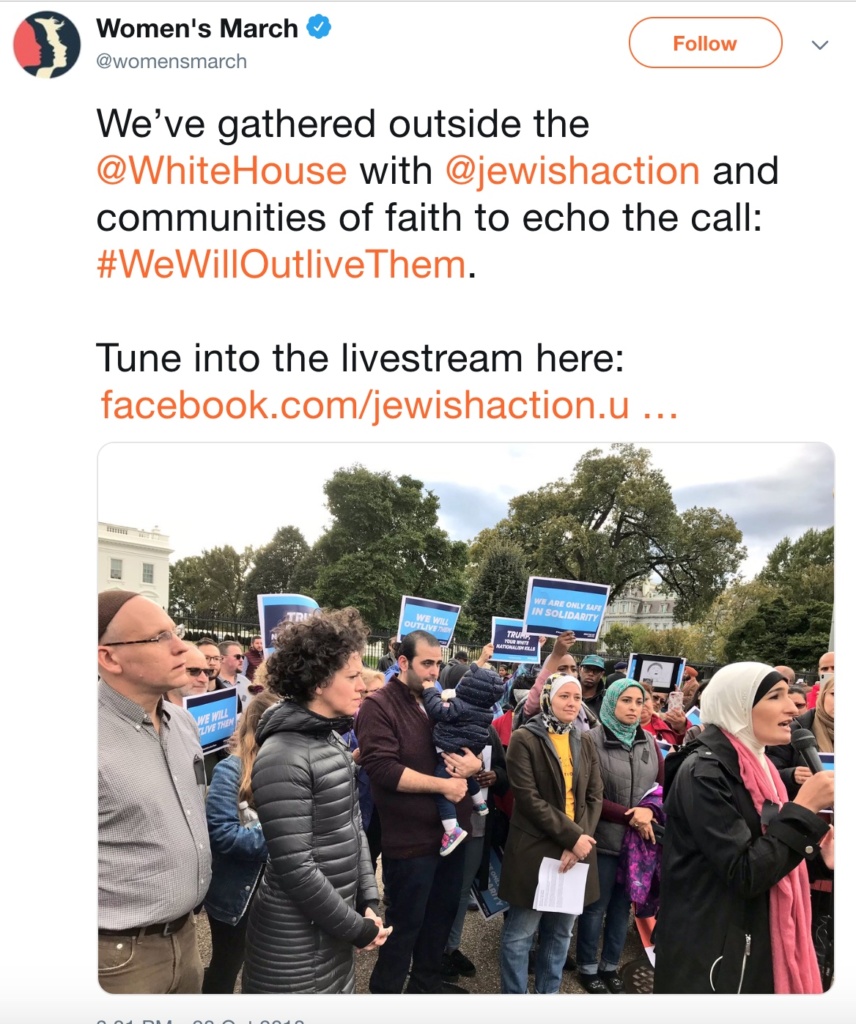 But one person’s statements of grief and solidarity stand out, largely because it contrasts a long record of sowing enmity and anti-Semitism. There was a vigil Sunday outside the White House. The national Women’s March made sure to post an image of national co-chair Linda Sarsour, microphone in hand, speaking in love and solidarity with American Jews.

“I hope that you commit and you join me and my sisters and brothers who are here today, to resist hate and choose unrelenting love every single time,” she said.

Her organization, MPower Change, issued a similar statement in Sarsour’s name, expressing “solidarity with our Jewish family, especially the community in Pittsburgh, after today’s horrific shooting at the Tree of Life Synagogue.

“In the face of overwhelming hate, we choose unrelenting love and unity. We recommit ourselves to dismantling anti-Semitism and all forms of racism.”

How lovely. If she is sincere, however, Sarsour would do well to revisit the years of hatred she has expressed against those who believe that the existence of Israel, the Jewish state, is a vital safeguard for Jews threatened by anti-Semitism around the globe.

By definition then, Sarsour’s ultimate ambition is a world with no Jewish state. BDS has been blasted as anti-Semitic, including by the Berlin State Office for the Protection of the Constitution, because it seeks to isolate Israel and because many BDS leaders advocate its elimination. And a one-state solution would flood Israel demographically, stripping it of its Jewish majority.

At the same convention, Sarsour blamed the Anti-Defamation League – the most prominent Jewish advocacy group in America – for the deaths of unarmed black people at the hands of police. Why? Because the ADL runs a program that takes high-ranking police officials to Israel, where they learn about fighting terrorism and other threats. To Sarsour, that means police “come back here and do what? Stop and frisk, killing unarmed black people across the country.”

Hear the whole clip for yourself:

Sarsour also argued at the ISNA convention that Muslims should not defend or “actually try to humanize the oppressor,” which was a reference to Israel.

Sarsour knows she has a problem being seen as an anti-Semite. She made a videolast year that seemed cynically devised to shut down those concerns. But in trying to condemn Jew hatred, Sarsour couldn’t help but minimize its severity, saying “it’s different than anti-Black racism of Islamophobia because it’s not systemic.”

She has been unrelenting, but “love” doesn’t seem to describe her attitude toward Jews.

During a discussion at New York’s New School a year ago, she blamed “Jewish media” for giving her a bad reputation.

Sarsour famously tweeted, “Nothing is creepier than Zionism,” and rejected offers of solidarity from pro-Israel Jews that are similar to what she claims to offer today. Those aren’t views limited to criticism of specific Israel policies, but a wholesale rejection of a Jewish homeland.

There are about 14.5 million Jews in the world, nearly half – 6.5 million – of whom live in Israel. Another estimated 5.7 million live here in the United States. France, Canada and the United Kingdom combined have another 1.1 million Jews. For the sake of argument, say only half of those Jews living outside Israel consider themselves Zionists. The available data indicates the figure is much higher.

But that means at least 10 million of the world’s 14.5 million Jews are Zionists. Sarsour, by her own words, is hostile toward about 70 percent of world Jewry. But she’s no anti-Semite?

She and her Women’s March colleagues have refused to condemn Nation of Islam leader Louis Farrakhan, even after he said “powerful Jews are my enemy” and recently called Jews termites.

Was the slaughter at the Tree of Life synagogue a turning point for Sarsour? It’s a valid question, considering her embrace of Rasmieh Odeh, a woman who was convicted in the 1969 bombing of a Jerusalem grocery store that killed two Israeli students. Odeh’s friend acknowledged her central role in the bombing plot – on camera – and Israeli investigators found similar explosives in Odeh’s bedroom.

Sarsour said she was “honored and privileged” to be in Odeh’s presence last year before Odeh was deported for naturalization fraud.

This doesn’t even consider Sarsour’s inability to condemn Hamas or acknowledge that its obsession with destroying Israel makes life for Palestinians in Gaza worse every day.

Sarsour spoke with emotion Sunday. Her voice cracked at times, and if you didn’t know her, you’d think she was offering a sincere, heartfelt expression of grief, love and support. The problem is we do know Sarsour. And we know skepticism is more than justified.