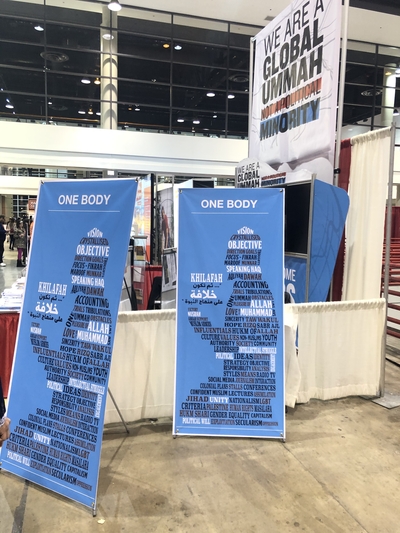 It is an ultra-conservative Sunni movement that seeks a global Islamic state. It has been banned in 13 countries, including Egypt, Jordan, Saudi Arabia, Indonesia, Germany and Turkey.

But representatives of the group Hizb ut-Tahrir (HuT) were welcomed recently by two of America’s largest Islamist groups at their annual joint convention. The group was able to distribute literature and talk with people at the Muslim American Society (MAS)-Islamic Circle of North America (ICNA) convention in Chicago the weekend of Dec. 27.

According to its American chapter, HuT wants to “revive the Islamic Ummah [global community] from the severe decline that it had reached, and to liberate it from the thoughts, systems and laws of Kufr [non-believers], as well as the domination and influence of the Kufr states. It also aims to restore the Islamic Khilafah State so that the ruling by what Allah (swt) revealed returns.” 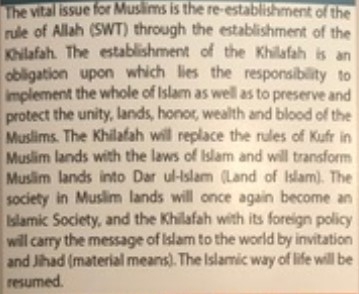 While HuT does not engage in violence, it has been described as a “conveyor belt” radicalizing Muslims who take up violent jihad.

MAS and ICNA each have ties to international Islamist movements that ultimately seek a global Islamic state, or Khilafah. MAS was created as an American branch of Egypt’s Muslim Brotherhood. ICNA has offered followers a curriculum that includes the vision of a global Islamic state and is linked with a Pakistanis movement called Jamaat-e-Islami (JI).

JI founder Maulana Syed Abdul Ala Maududi preached that “wherever you are, in whichever country you live, you must strive to change the wrong basis of government, and seize all powers to the rule and make laws from those who do not fear God.”

Inside the convention, many of the panels had a narrower focus on demonizing Israel with rejectionist rhetoric and outright lies.

That included Zahra Billoo, executive director of the Council on American-Islamic Relations’ (CAIR) San Francisco chapter. Billoo seems to make a point at each speech of saying she rejects Israel’s right to exist. She said it again to her MAS-ICNA audience, mixing in her enduring bitterness about being appointed to, and removed from, the Women’s March national board during 48 hours in September.

“This new Board could not withstand two days of the same kind of pressure that the founders experienced for two and a half years,” she said, referring to a series of anti-Semitic controversies her predecessors faced. “And so over the objection of every single co-founder, the majority of the new board voted me out for a decade of tweets criticizing the apartheid state of Israel. I said this at the AMP convention and I’ll say it here, and I’ll get some people in trouble. I don’t believe that Israel as it exists today has the right to exist. It exists in violation of international law. It exists in violation of our sense of decency. In the same way that I oppose a white nationalist state, I oppose a Zionist national state.”

On the same panel, “How to Talk About Palestine and Counter Censorship,” Benedictine University student Ayah Ali recounted her encounter with a Holocaust survivor that triggered controversy. In her recounting, Ali asked a perfectly reasonable, inoffensive comment. But “it was taken completely out of context.”

The video tells a far different story. Ali is president of Benedictine’s Students for Justice in Palestine (SJP) chapter. Like Billoo, AMP doesn’t think Israel should exist. When Holocaust survivor Harold Kasimow spoke at Benedictine in October, Ali thought it appropriate to challenge him to ask him to “condemn the establishment of the Zionist Israeli state.”

When he wouldn’t, Ali and others walked out.

Yet, Ali said the Holocaust marked “a very similar occurrence that is happening present day” and cast Israel as responsible for “the complete ethnic cleansing of the Palestinian people, the way that the Jewish people were exiled and ethnically cleansed.”

“And so because he kept saying he never wants to see another child go through what he went through, I was like, you know, maybe he’ll support us as Palestinians,” Ali told the MAS-ICNA audience. “So I stood in solidarity with him and I expected the same in return.”

She admitted getting nervous when she spoke to Kasimow, but told the MAS-ICNA audience, “No matter how I would have addressed it would have blown up the same way.”

If Ali can’t understand the difference between a systematic genocide and the Palestinian-Israeli conflict, it might be because self-anointed leaders of her movement plied her with false history.

In a different convention session, Osama Abuirshaid, the national policy director for American Muslims for Palestine (AMP) flat-out fabricated significant aspects of the Palestinian-Israeli conflict. AMP routinely engages in anti-Israeli rhetoric, sponsors conferences that serve as a platform for Israel bashers, and openly approves “resistance” against the “Zionist state.” One AMP official acknowledged the goal is “to challenge the legitimacy of the State of Israel.”

Palestinians there have been under Hamas rule since 2007, and the terrorist group’s obsession with launching terrorist attacks against Israeli civilians has helped drive the area into an economic catastrophe with a crumbling infrastructure. But Abuirshaid spared Hamas any liability.

And while reality in Gaza is difficult, it apparently wasn’t bad enough, so the two opted to make stuff up.

“But why is Gaza on the brink of collapse?” Abuirshaid asked. “I’ll give you some numbers and then again I’ll put in perspective. Now according to the UN numbers 77 percent of the Gazans live in poverty.

It’s not clear where that number came from. This United Nations website puts the Gaza population living in poverty at half his claim – 38 percent.

Israel allows food aid into Gaza, but limits each Palestinian to 2,027 calories per day, he claimed. That’s in line with a healthy diet, according to nutrition experts.

Nearly all water in “Gaza’s aquifer is undrinkable,” Abuirshaid said, “and the reason is that they don’t have electricity and the sewage. goes into the ground. And it’s because of the water coming from the sea. Unfortunately, because of the Egyptian measures in which they brought pipes under the sea into Gaza, and these pipes have holes in them, and the water now is contaminated with the sea water. So people are not drinking clean water.”

He did not let his audience know that Israel has three pipelines sending clean water into Gaza and is building a new one, larger than the others.

“Construction work began in recent days,” the Times of Israel reported in June, “and is being conducted under heavy military guard out of fear that Gazan terror groups will open fire on the crews as the pipeline-laying work nears the border.”

Hamas diverts money and supplies that could be used to rebuild Gaza’s infrastructure and improve housing in order to build missiles and dig tunnels to use in terrorist attacks. Israel sends in clean water and is working on improving that, despite the threat posed by Gaza-based terrorists.

That’s an odd way to carry out a “silent genocide.”

MAS-ICNA events routinely feature extreme voices pushing a hardline political/religious ideology. But this year, their joint convention outdid itself, welcoming a group openly seeking to create a global Islamic state, a woman who found it appropriate to harass a Holocaust survivor who didn’t embrace her twisted comparison, and others pushing misinformation to reinforce hatred of Israel.