An Indiana University (IU) dean admits its School of Philanthropy “failed in our due diligence” when it invited deported Palestinian Islamic Jihad (PIJ) board member Sami Al-Arian to participate in a program about the war on terrorism and its impact on Muslim charities.

The Investigative Project on Terrorism (IPT) reported on the panel discussion Dec. 20, detailing Al-Arian’s prominent history of PIJ involvement and his antisemitic speech, prompting readers to complain to IU President Pamela Whitten. Amir Pasic, dean of the Lilly Family School of Philanthropy, wrote back to apologize.

“Though he had been recommended to those developing this session due to his academic work and recent efforts organizing a global conference on Islamophobia,” Pasic wrote, “we failed in our due diligence to consider his past comments and actions prior to extending an invitation to him. As a result, we have further strengthened our protocols.”

Pasic issued a similar statement to the IPT, but did not answer questions about who recommended Al-Arian or what changes have been made.

The IPT since has discovered several people on IU’s Muslim Philanthropy Initiative’s advisory board whose organizations have been investigated for terror financing, or have been supportive of Al-Arian for years.

Pasic did not respond Tuesday to follow-up questions about those board members.

“Yet Indiana University collaborated in offering this unrepentant antisemitic supporter of terrorism a platform, and IU faculty participated in praising him as having something to offer IU webinar participants,” Trigoboff wrote. “In reality he had nothing to offer except hate mongering and deceit, the lingua Franca of the antisemitic supporter of terrorism.”

In his response, Pasic said he “share[s] these concerns and offer my sincere apology for the decision to include Sami Al-Arian on this panel, and for the impact his participation had on our community.”

“We pride ourselves — as a school, campus, and university — for our commitment to being an inclusive community. In this case, we fell short in living up to our values in this regard.”

This “was a better response than I typically get,” Trigoboff said.

Other letters he has written to universities have triggered “reflexive responses and excuses about free speech,” Trigoboff said. “I thought this was a positive and constructive first step,” but lacked specifics about what steps will be taken to prevent a similar mistake.

Al-Arian ran a charity called the Islamic Committee for Palestine. Its programs routinely featured PIJ officials and supported its actions. In a 1991 event captured on videotape, Al-Arian listens passively as his charity is described as “the active arm of the Islamic Jihad Movement in Palestine.”

The IU program was co-sponsored by the Muslim Legal Fund of America (MLFA) and IU’s Muslim Philanthropy Initiative and McKinney School of Law.

The Muslim Philanthropy Initiative’s advisory council is packed with people who have their own ties to charities suspected of terror financing. Several of those groups have been supportive of Al-Arian.

Yaqub Mirza is listed as president and CEO of the Sterling Management Group. But Mirza also was a longtime board member at the Virginia-based International Institute of Islamic Thought (IIIT). The IIIT provided at least $50,000 to Al-Arian’s Tampa-based think tank during the early 1990s.

In a 1992 letter, then-IIIT President Taha Jabar Al-Awani said that Al-Arian’s operation was “an extension” of IIIT. “When we make a commitment to you or try to offer,” Al-Awani wrote, “we do it for you as a group, regardless of the party or the façade you use the donation for.”

In 1988, federal investigators said that a source informed them that Mirza and fellow IIIT board member Jamal Barzinji were “members and leaders of the Ikhwan [Muslim Brotherhood].”

IIIT officials spoke at the Muslim Philanthropic Initiative’s 2018 and 2019 symposia.

The Zakat Foundation underwrites a fellowship at the IU Lilly Family School of Philanthropy.

And before Demir ran the Zakat Foundation, he worked as a public relations officer for the Benevolence International Foundation (BIF). 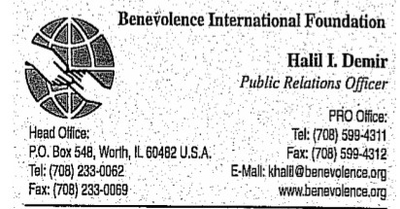 The Treasury Department designated BIF and related entities as terror financiers in 2002 after CEO Enaam Arnaout was indicted for providing support to al-Qaida and other terrorists. Arnaout pleaded guilty to racketeering conspiracy.

The IU council also includes Islamic Circle of North America (ICNA) President Javaid Siddiqi. ICNA is closely aligned with the South Asian group Jamaat-e-Islami, whose founder, Abu Ala al-Mawdudi, called for the elimination of “the rule of an un-Islamic system and establish in its stead an Islamic system of state rule.”

In 2019, ICNA joined with the Coalition for Civil Freedoms, a group Al-Arian co-founded, which is now run by his daughter, on a report called “The Terror Trap.”

It argued “that the war on terror has been largely a charade designed to make the American public believe that a terrorist army is loose in the U.S., when the truth is that most of the people convicted of terrorism-related crimes posed no danger to the U.S. and were entrapped by a preventive strategy known as preemptive prosecution.”

The report makes no mention of two deadly terrorist attacks – one in San Bernardino and the other at the Pulse Nightclub in Orlando, that left a combined 63 people dead.

ICNA also has lobbied for the release of convicted al-Qaida terrorist Aafia Siddiqui.

It is not known whether the council played any role in the IU webinar on Muslim charities after 9/11. But it is unlikely many members would have seen a problem with it.