With the release of his spellbinding thriller and now leading box office hit “Infidel,” Cyrus Nowrasteh has now firmly established himself as one of the most talented, creative and certainly the most politically courageous film directors –screenwriters in the United States. Nowrasteh has a mile long list of film credits to his name but readers of the Investigative Project on Terrorism might especially remember a film of his, and his wife Betsy, that I reviewed in 2009 called, “The Stoning of Soroya M.”

It was based on a true story of a woman in Iran in the 1980’s whose adulterous husband conspired with the local mullah and the male villagers to falsely accuse and convict the woman of her infidelity. I described the movie “as one of the most compelling, stirring, and riveting films I have ever seen,” a description that still holds today.

It was the first time in cinema that a stoning was re-created—and I believe the effect of having made that film finally shocked the world’s conscience at the time of the prevalence of such barbaric Islamist atrocities, and even put a halt—albeit only temporary—to the radical Islamist thugs who carried out such stonings of women in various areas of the Islamic world at the time. 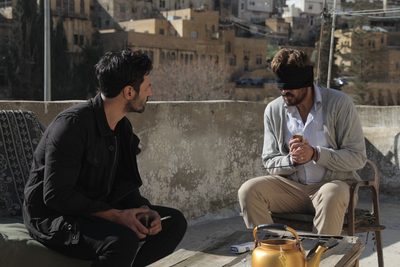 In “Infidel,” Nowrasteh has also captured difficult but widespread and contemporary problems that many American “progressive” politicians, along with their mainstream media cohorts have preferred to shove under the carpet or worse: they would rather appease the Islamist bullies who perpetrate major acts of aggression, often hiding under the thinly-veiled shield of victimhood, a deception that has worked wonders for many Islamist groups and for Islamist regimes.

“Infidel” tells the gripping story of an American Christian blogger, played by Jim Caviezel, who is invited to speak at an interfaith dialogue conference in Cairo at the prestigious Al Azhar University. When the American professes his faith in Christ as God, he is immediately attacked by several Islamist hotheads who accuse him of “Islamophobia,” an artificially fabricated epithet, specifically designed to tar anyone who offends militant Islamists with the stench of racism toward Islam.

Accused of being an Islamophobe, the character played by Caviezel gets kidnapped by Hezbollah terrorists who smuggle him to Teheran where he is imprisoned, tortured and arbitrarily sentenced to death on spurious charges of espionage by an Iranian mullah in scenes described by dissidents as nearly identical to the ones replicated by Nowrasteh. As in real life, the State Department bureaucrats don’t want to do lift a finger to help save the American blogger’s life lest they antagonize Iran, a sad but true replication of art imitating life, at least prior to 2016.

In the film a fascinating subplot develops as a small covert but flourishing Christian movement, led by women (whose Christian husbands have all been jailed), comes to the American blogger’s rescue—again paralleling the historical and unprecedented emergence of an underground Christian movement in a fanatically anti-Christian Iran.

Nowrasteh deserves incredible credit for tackling all these hot button issues –revealing the Islamophobia accusation for the outrageous deceit for which it was created; portraying Hezbollah terrorists as the Islamist thugs they truly are rather than antiseptically describing them as a “political group” or as a simple “militia,” as some cowardly media outlets and European governments do; and not being afraid to represent the vicious murderous Mullahs in Iran as nothing more than Mafioso in turbans, rather than paying homage to policies espoused by politically correct apologists who still justify the horrific Khomeini Revolution and the tens of thousands of deaths it caused on the “interference” by U.S. in 1953 in Iran in helping to overthrow the Marxist leader Mossadeq. As noted by Iran specialist Ray Takeyh in 2010, “…[R]esponsibility for the suffocation of the Iranian peoples’ democratic aspirations in the summer of 1953 lies primarily with those who went on to squash another democratic movement in the summer of 2009—the mullahs. It is they who should apologize to the Iranian people.”

If past is prologue, “Infidel” will of course likely be criticized by the high priests at the New York Times and Washington Post, whose entire “moral” compass on the Islamist spectrum—endorsing and propounding the deceit of Islamophobia, appeasing Iran, treating Hezbollah with the moral equivalence, even less, than it treats Israel, and refusing to pay any real attention to the plight of persecuted Christians in the Middle East—is totally torn asunder by “Infidel” or by Nowrasteh’s earlier works.

But beyond the politics, “Infidel” is simply great drama with pacing that will keep you on the edge of your seat or sofa. It grips you from the opening scene and doesn’t let you go, along with some wonderful acting, especially by the strangely charismatic British accented Hezbollah terrorist leader, played by Hal Ozsan. Caviezel delivers as always as only he could. Catch the film if you can while it still playing. Otherwise, be sure to watch it when it starts streaming VOD.