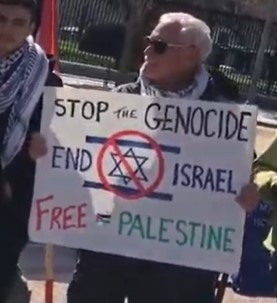 Professional politicians say a lot of things that just aren’t true, so perhaps it’s not fair to hold others to a higher standard than the people we put in power. But when it comes to anti-Israel activists, it seems that anything goes, including claims that cross the line into outright anti-Semitism. And the bigger the whopper, the better.

Marc Lamont Hill can make the outrageous claim that Israel poisons Palestinian water and still be invited to speak at fundraisers and other events. Linda Sarsour can repeat the blood libel that Jews and Zionists justify police killings of unarmed black people in America – and worse, are responsible for them – and still get a lucrative Simon & Schuster book deal and serve as an official surrogate for Bernie Sanders’s presidential campaign.

Her chronic displays of anti-Semitism largely are overlooked by national news outlets.

Fellow Sanders surrogate Amer Zahr can equate Israel with ISIS, a sentiment repeatedly uttered by Council on American-Islamic Relations (CAIR) chapter directors Zahra Billoo and Hussam Ayloush, without consequence. Billoo comes right out and says she does not “believe [Israel] has a right to exist.”

Their obsessive focus on Israel is telling. China is imprisoning and indoctrinating 1 million Muslims. Syria has spent years engaging in mass murder of hundreds of thousands of its own people and displacing millions more, numbers exponentially greater than Palestinian casualties in all the wars and conflicts with Israel. But thus far, none of these activists have advocated ending these, or any other states. Just the world’s lone Jewish state.

And that brings us to a protest held Sunday in front of the White House. A small group met for the anti-Israel group Al-Awda: The Right of Return of Palestinian Refugees’ “national rally to support Palestine and protest AIPAC.” The American Israel Public Affairs Committee (AIPAC) was holding its annual convention a short distance away.

“AIPAC is a terrorist organization,” Eric Resnick, who was part of the anti-Israel group Jewish Voice for Peace from Cleveland, told the protest. “AIPAC commits war crimes.”

Advocacy, when done in support of Israel, is a war crime. He didn’t offer any examples.

“Can I get an amen for that?” asked speaker Richard Siegel, identifying the sign-holder as his friend.

The data makes clear there is no genocide targeting Palestinians, whose population has grown by 400 percent in the past 50 years. But the solution Siegel and his friend offer actually would be a genocide. If you “End Israel,” you destroy a people and their culture. There is no historical example of that being done without massive death and devastation.

This virtue-signaling ignorance, unfortunately, is not an aberration at anti-Israel protests.

Rare is the anti-Israel gathering that does not feature the chant, “from the river to the sea, Palestine will be free.” It was repeated dozens of times during Sunday’s Al-Awda protest. It’s a not-so-subtle dream of a Palestinian state that stretches from the Jordan River to the Mediterranean Sea, swallowing all of Israel.

That vision is codified in an updated, supposedly more moderate Hamas charter, a document that unambiguously calls for Israel’s annihilation: “Hamas rejects any alternative to the full and complete liberation of Palestine, from the river to the sea.”

The protest featured a number of D-list speakers, many of whom were introduced by first name only. One, identified as Andre from Baltimore, let his guard slip for a moment, drawing knowing laughs from the crowd.

“We say, ‘Down with Israel.’ I really want to say ‘Death to Israel.’ Israel out of occupied Palestine, Palestine for the Palestinian people. Long live Palestine, sisters and brothers.”

Another Baltimore resident, Miranda, represented something called Youth Against War and Racism. Yet she offered some bigoted scapegoating of her own, blaming Israel for global woes that are felt here at home. She claimed Israel exists solely for “driving up profits, they’re driving up prices.” Through its “active genocide against the Palestinian people … it’s actively destroying the lives of people, working people here in the United States.”

Don Bryant, from Al-Awda’s Cleveland chapter, argued it is not anti-Semitic to deny Jews a country in their ancestral homeland. If anything, “Israel is the anti-Semite here,” because Palestinians are a Semitic people and Israel is “bombing the crap outta Palestine.”

Israel’s bombings in Gaza have followed terrorist attacks, including rockets fired at Israeli communities. The attacks are focused on terrorist infrastructure and often include advanced warnings for civilians to leave the area in an attempt to minimize casualties. No speaker urged Hamas or Palestinian Islamic Jihad to cease firing those rockets at civilians.

Future protests should be held at the museum instead of in front of the White House, said Eric Resnick, representing the anti-Israel group Jewish Voice for Peace.

“We need to move this rally to the Holocaust museum and use it to tell the story of the Nakba,” meaning catastrophe – how Palestinians refer to Israel’s creation. “Because when those people say ‘Never Again,’ they don’t mean ‘Never Again’ to anyone, anywhere else. They just mean ‘Never Again’ to Jews. And they also mean the Jews can be as mean and as nasty and commit as many crimes as they want to because they were victims once.”

The museum’s website offers direct evidence proving he is wrong.

“It’s almost like we’re inventing a new Jewish religion based on Christianity that poses the Jews as Jesus, Auschwitz as the cross and Israel as the resurrection.”

Later, protesters marched toward the convention center to protest the AIPAC convention. There, a man was videotaped shouting that “the Holocaust will come back to you … you gonna get burned if you don’t give us the land.”

Protest organizer Abbas Hamideh, a Hizballah supporter, claimed the man was a “a professional provocateur plant,” indicating there may be a line of hating Jews that even he wouldn’t cross.

But as we’ve shown, the speakers he invited and introduced advocated protesting Israel outside the national Holocaust museum, and repeatedly chanted a call for Israel’s elimination. One said he’d prefer to say “Death to Israel.”

Is the alleged plant really saying anything Hamideh’s people didn’t?

This article was originally published by The Investigative Project on Terrorism.