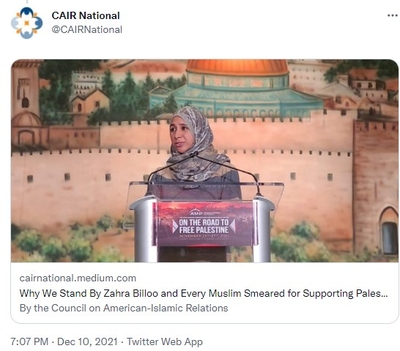 A pretty remarkable thing happened last weekend. The leaders of two organizations which are supposed to be in business to fight bigotry took turns accusing each other of engaging in bigotry.

One party is right. But having us say so doesn’t go far. So consider this an invitation to American news outlets which engage in fact-checking to examine the statements from the Council on American-Islamic Relations (CAIR) and the Anti-Defamation League (ADL) and sort out fact from fiction for readers and viewers.

The fight was sparked by comments, which the Investigative Project on Terrorism first reported Dec. 1, made by CAIR’s San Francisco chapter director Zahra Billoo during a Thanksgiving weekend conference hosted by the anti-Israel group American Muslims for Palestine (AMP).

After seeing her boss, CAIR co-founder and Executive Director Nihad Awad, call Tel Aviv – Israel’s most populous city – “occupied,” Billoo warned her audience not to distinguish between “the vehement fascists” among pro-Israel voices in America, including me, and “the polite Zionists.”

In Billoo’s thinking, if you think Israel should continue to exist, you’re an enemy.

In the wake of criticism, CAIR issued a statement Friday that denied that Billoo said anything objectionable, and accused her critics of mounting an “online smear campaign,” asserting it was an example of “false allegations of anti-Semitism in a cynical attempt to silence American Muslims who speak up for Palestinian human rights.”

It singled out ADL CEO Jonathan Greenblatt, who called Billoo’s remarks, “textbook vile, #antisemitic, conspiracy-laden garbage attacking the mainstream US Jewish community” and “something you would expect from white supremacists.”

Greenblatt “claims to be an ally in the fight against Islamophobia,” CAIR’s statement said, “while regularly weaponizing Islamophobia against American Muslims.”

Somehow, CAIR claimed the reference to white supremacists as sexist: “Comparing a female Muslim civil rights leader to a white supremacist is a disgusting yet unsurprising new low,” it said.

Then, CAIR went all Pee-wee Herman on the ADL. It “supported unconstitutional laws punishing political boycotts of Israel” and Greenblatt dared to attend a ceremony celebrating the U.S. Embassy in Israel’s move from Tel Aviv to Jerusalem despite the presence of “bigots like Benjamin Netanyahu, John Hagee and Robert Jeffress …”

CAIR then turned to social media to accuse the Jerusalem Post of “lying” in a story published Sunday that accurately quoted Billoo’s comments.

Greenblatt responded by saying Billoo continued “a long campaign to push American Jews out of social justice and civil rights spaces.” Her comments and CAIR’s defense were “both blatant acts of antisemitism.”

All I can say is welcome to the party. Some of us have been sounding the alarm about CAIR’s support for Hamas and antisemitism since the 1990s. Perhaps that’s why CAIR smears people like Daniel Pipes and me as “vehement fascists.”

(For more on CAIR’s history of antisemitism, see IPT’s recent two-part series in the Algemeiner here and here.)

The ADL chief, in CAIR’s telling, does not know what antisemitism is.

“Criticizing Zionism — which many Jewish scholars, activists and groups have done since the movement arose in the 19th century — is not anti-Semitic,” its statement said.

But CAIR’s rejecting Israel’s right to exist as a Jewish homeland is something much more than “criticizing” the concept of Zionism. And it is among the specific definitions of antisemitism accepted by the Obama administration State Department in 2016.

“To so brazenly refer to the vast majority of American Jews as enemies solely because of their connection to the Jewish homeland,” Greenblatt wrote, “to repeatedly blame Jews for Islamophobia, and to unapologetically promote tropes used against Jews for millennia, is grotesque.”

“Grotesque” is nothing new to Zahra Billoo. At the 2018 AMP conference, she said she would not “legitimize a country that I don’t believe has a right to exist.” Her May 2018 tweet equating the Israel Defense Forces (IDF) to bloodthirsty ISIS terrorists remains online:

She was appointed to the board of the national Women’s March in 2019, only to be unceremoniously dumped days later after the liberal group “found some of her public statements incompatible with the values and mission of the organization.”

Incompatible with the Women’s March, but right at home inside CAIR, which said Friday it would “continue to proudly stand by Zahra.” That sentiment was repeated by Awad, Chicago chapter leader Ahmed Rehab, Los Angeles chapter leader Hussam Ayloush and national government affairs director Robert McCaw.

But what is CAIR proudly standing by? In her AMP speech, CAIR literally accused Jews of being behind a “a well-funded conspiracy” to push “Islamophobia … to marginalize us, to imprison us, to deport us, to silence us.”

“And I’m not going to sugarcoat that. They are your enemies. There are organizations and infrastructures out there who are working to harm you.”

Her message was not to love your enemies. It was the opposite. Do not work with them. Do not try to understand their point of view, or dare to seek common ground. Do not trust them. Hate them.

CAIR has a tendency to tell people to ignore the exact words people say when those words expose awkward, uncomfortable realities.

In the lead-up to the 20th anniversary 9/11 commemorations, for example, CAIR waged a campaign to coerce journalists and educators not to use “inaccurate and inflammatory terms such as ‘Islamic terrorists,’ ‘jihadists,’ or ‘radical Islamic terrorists.'”

Terrorist organizations from al-Qaida to Hamas and Hizballah invoke religious doctrine – Hizballah literally translates to “party of Allah” – but CAIR wanted Americans to believe that accurate reporting somehow is an act of anti-Muslim bigotry.

The same play is being run in the wake of Billoo’s comments. She didn’t discourage “Muslims from working with Jewish groups at-large,” CAIR’s statement claimed. She just lumped the ADL, Jewish Federation, campus Hillels and “Zionist synagogues” into an enemies list, connecting them all to a vast Jewish conspiracy to harm Muslims. It is Billoo who has been wronged and victimized, CAIR claimed. Her critics are the haters.

CAIR and the ADL are among the most visible advocacy groups in the country. There are objective facts in play. It’s time for a major news organization to step up and make clear what we and others have known about CAIR for years.

This column was originally published at The Investigative Project on Terrorism, where you can watch the video as well