Despite a collapsing Lebanese economy and considerable political turmoil, Hezbollah continues to threaten Israel. These threats must be taken seriously, given the Iranian-backed proxy army’s Hezbollah incredible stockpile of long-range, medium range and short-range missiles that can reach every square inch of Israel.

I spoke last Friday with the Middle East Forum about the worst-case scenarios for a conflict between Israel and Hezbollah. The possibilities include a surprise attack by Hezbollah, an Israeli pre-emptive strike, an unplanned escalation and a multi-front war against Israel.

The situation is a powder keg, and one false move, can set any of these scenarios in motion. Israelis understood the surprise attack possibility in 2019, when they discovered several well-built tunnels that started more than a half mile inside of Lebanon, but crossed into Israel. Hezbollah could have used them to attack northern Israeli communities, trying to kill as well as take many Israeli civilians hostage. This kind of terrorist attack would have sparked a full-blown war.

Israel already lives under constant threat from Hezbollah’s missile arsenal, much of which has been smuggled into Lebanon and retrofitted with advanced GPS guidance systems.

A multi-front war against Israel appears more possible now that Iraqi militias can use Iranian-supplied missiles which can strike inside Israel. From the south, Yemeni Houthis now have projectiles capable of reaching Israel’s port city of Eilat along the Red Sea. In Syria, Hezbollah has battle-tested forces capable of attacking, and there are Iranian and Russian weapon systems ready to strike. Finally, Gaza is home to Hamas and Palestinian Islamic Jihad, terrorist groups that have been firing rockets at Israeli civilian communities for years. If they all acted together, a five-prong multi-front war against Israel is the worst-case scenario.

The 2006 war between Israel and Hezbollah was started after Hezbollah kidnapped two Israeli reservists and killed three others in an unprovoked cross-border raid Hezbollah. This is a perfect example of a war that neither side wanted, but still took place. During the 34-day war, Hezbollah launched more than 100 rockets per day – for a total of about 4,000 of its estimated 10,000 total rockets and missiles at the time. In the next war, Hezbollah could launch a minimum of 2,000 rockets a day from its 150,000 estimated inventory, a senior IDF official told a Jerusalem conference March 15. Hezbollah’s arsenal is believed to include 130,000 short range rockets that can travel less than 70 km, about 500 medium range rockets (greater than 70 km and less than 250 km), and about 100 long range rockets (greater than 250 km) missiles. According to a 2018 report from the Jewish Institute for National Security Affairs (JINSA), “Hezbollah now possesses more firepower than 95 percent of the world’s conventional militaries, and more rockets and missiles than all European NATO members combined.”

Analysts believe that Hezbollah has between 500-1,000 precision guided munitions outfitted with enhanced GPS guidance systems that can hit every square inch of Israel with devastating accuracy. With long range advanced GPS Scud B warheads carrying as much as 2200 pounds of high grade explosives, these missiles could easily destroy top strategic targets in Israel such as the Dimona nuclear power plant, Ben Gurion Airport, the Kirya, Israeli power plants, Israeli military bases, and massive civilian carnage—all targets that Nasrallah has personally threatened to attack in the next war with Israel in an interview he gave in 2019. (For comparative damage assessments, the unguided Qassam rockets launched by Hamas carry a payload of only 12 pounds of explosives.) Additionally, Hezbollah reportedly has several dozen anti-ship missiles, such as the three C-802 anti-ship missiles that they fired, at the Israeli Navy ship Hanit during the 2006 war, killing four Israeli sailors. 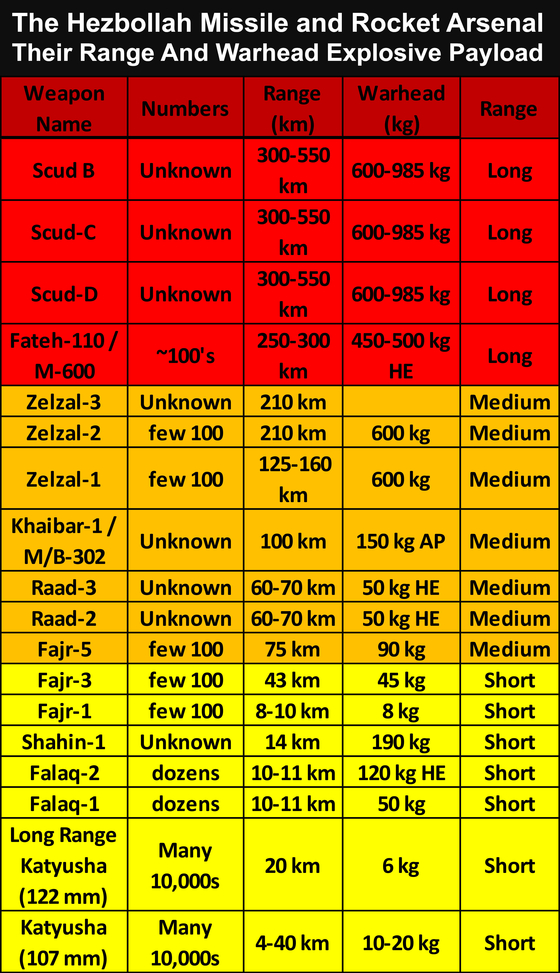 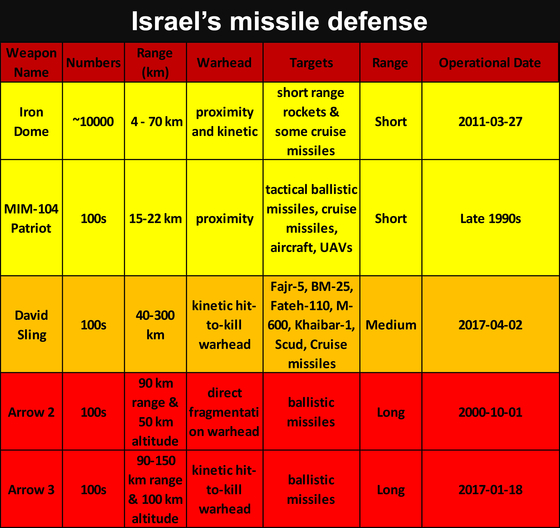 In response to the Hezbollah threat, Israel has a three-tiered system to protect its citizens and its strategic assets. These three tiers include: missile defense, bombing by Israeli Air Force (IAF) fighter aircraft and civilian bomb shelters. The missile defense tier is a multi-layered missile defense system that includes missile intercept systems like Iron Dome, PATRIOT, David’s Sling, Arrow 2 and Arrow 3 (see graphic for estimated numbers, ranges, type of warhead, targets, range and the date when the system became operational). The second tier is the IAF’s fighter jets that during a conflict would attack Hezbollah missile launch and storage sites. The IAF has more than 425 fighter aircraft, that including almost 50 new F-35s, 50 F-15s and 25 F-15Es, and 300 F-16s. If war does break out, Israel believes it can hit 3,000 Hezbollah targets per day. Finally, the third layer of Israeli defense would be the civilian bunkers that are in many Israeli homes or part of the local city and village infrastructure.

In addition to the massive Hezbollah rocket and missile threat, the Gaza-based terrorist groups Hamas and Islamic Jihad also could attack Israel with their estimated 15,000-20,000 rockets and missiles. 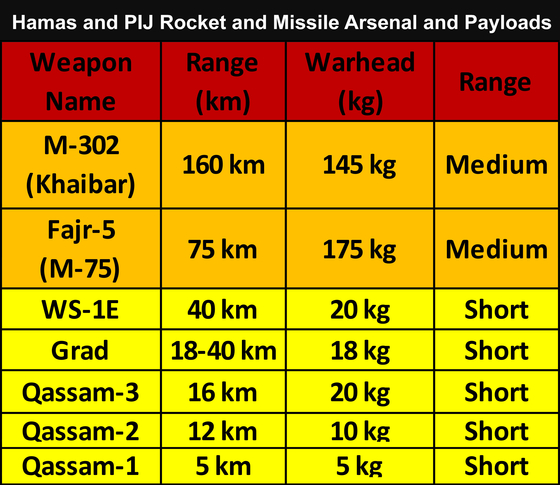 The map showing ranges and flight times from Lebanon and from Gaza provide an idea of how much time someone in Tel Aviv has to reach shelter once the alarm system detects an incoming rocket. For example, a rocket launched by Hezbollah in Lebanon takes about 75 seconds to hit Tel Aviv, whereas a rocket fired from Gaza takes only 30 seconds. People living close to the northern border of Israel and near the Gaza Strip have only 10-15 seconds to react during a rocket attack.

In response, Israel’s Iron Dome missile defense system would target those rockets heading toward population centers and strategic targets. David’s Sling, with hundreds of interceptors, would target the longer-range rockets and missiles. But despite their sophistication, those systems would be overwhelmed in a war in which 2,000 missiles were launched into Israel each day. In May 2019, Hamas and Islamic Jihad launched around 690 rockets and mortars at Israel with Iron Dome shooting down approximately 240 projectiles. This means that unguided munitions launched from Gaza were about a third on target or happened to be on target.

Using the same percentages, and assuming the same capabilities, 2,000 Hezbollah rockets per day launched from Lebanon would require about 660 Iron Dome interceptors and an unknown number of David’s Sling interceptors. In the meantime, the IAF would be destroying launchers and missile storage and assembly locations throughout Lebanon. Therefore, the rate of Hezbollah rocket and missile fire would probably decrease over time, especially those with longer ranges. This would force Hezbollah to fire more of its shorter-range rockets with less effect on strategic targets.

With approximately one-third of all Israelis having bomb shelters in their homes or apartments, the rest would go to local city bomb shelters or to their neighbors’ shelters. In 2006, Israel did not have a missile defense system that would intercept short and medium range missiles and rockets.

The fact that the IAF can strike 3,000 targets per day offers a strong deterrent message to Hezbollah about what a preemptive attack by the IAF could do.

If Hezbollah tried to launch a surprise attack against Israel, in addition to rocket and missile fire, the Iranian-terror proxy could attempt a ground attack to kill or capture Israelis living along the border with Lebanon. Most estimates put the number of active Hezbollah combatants rising from 14,000 in 2006 to 25,000 with a reserve force of 20,000-30,000.

Nasrallah has said that he is not interested in a war with Israel at this time. He said that he would not have instigated the 2006 war if he [A1] knew the tremendous damage that would be done to Lebanon’s infrastructure. However, Iran could have different plans for Hezbollah.

Beyond missiles and rockets, Hezbollah’s capabilities have increased since 2006. Its fighters helped the Syrian army fight against ISIS for almost a decade, growing more proficient in combat. The question is whether the new Israeli tank active protection system (called Trophy), that the U.S. Army is purchasing, are able to protect them against the Hezbollah arsenal of a variety of approximately a thousand Russian anti-tank systems (AT-3,4, 5, 13, and 14).

Any escalating conflict would cause significant casualties and a lot of destruction on both sides. The damage from a 34-day war in 2006, when Hezbollah had a fraction of the firepower it can unleash today, makes this reality clear. The Associated Press tallied some of the damage in that conflict:

There is reason for skepticism that deterrence can work with actors like Nasrallah or Hamas. As for Hezbollah’s ultimate goal, Hezbollah’s stated goal is the same as Iran’s – the destruction of the Zionist state. The only thing stopping Hezbollah right now is the fact that the Israelis have a more powerful military and can inflict more damage against the Lebanese infrastructure, for which Hezbollah will be blamed. Today, Lebanon is suffering the worst economic debacle in its history. Lebanese currency has been devalued by up to 90 percent in just the last year. Hezbollah is being blamed by much of the Lebanese population for the massive corruption that has led to this unprecedented economic crisis.

This article appeared originally on the Investigative Project on Terrorism website.