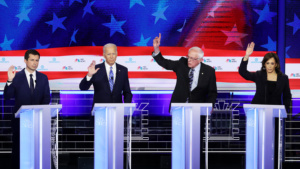 Roger Aronoff, the executive director and editor of the Citizens Commission on National Security, was a recent guest on the Don Smith Show. He discussed some of the best moments of the Democrat presidential candidate debate last week in Florida, as well as the media coverage of the two-night event. A highlight was on the second night, when all of the candidates raised their hand to say that their “government plan would provide coverage for undocumented immigrants.”

The views expressed by CCNS members are the views of the individual members, and are not necessarily the views or positions of the entire CCNS.