If Saturday’s horrifying terrorist attack in an El Paso Walmart had taken place in Jerusalem, leaving 22 Israelis dead, the killer would rot in jail knowing his family would be taken care of, paid every month by his government.

He might one day have a park, or a school, or a street named in his honor. He would be held up as a hero and used to inspire more killing. Children would be encouraged to follow his lead.

This is by no means an exhaustive list of how the Palestinian Authority and others incite violence against Israeli civilians. But it’s why, in the wake of discussions about the role political rhetoric plays in attacks like the El Paso massacre, CNN anchor Jake Tapper made a passing reference to Palestinian incitement.

For the sin of invoking a real thing, Israel-haters are demanding Tapper be fired.

It seems to have started with Sana Saeed, a host and producer with Al-Jazeera’s online arm, AJ+. 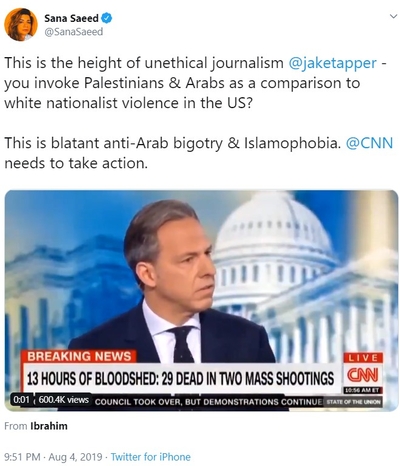 “Collect your man, CNN,” she wrote Sunday after calling Tapper’s remarks “the height of unethical journalism.” That’s a charge on a scale with plagiarizing, lying or stealing information. What, exactly, did Tapper say to generate such an accusation?

“You hear conservatives talk all the time—rightly, in my view—about the tone set by, well, the Arab world,” Tapper said. “The Palestinians and the way they talk about Israelis, justifying … no direct link between what the leader says and the violence to some poor Israeli girl in a pizzeria—but the idea you’re validating this hatred.”

“You can’t compare the ideology of Hamas with anything else,” Tapper said, “but at the same time, either tone matters or it doesn’t.”

Sober viewers might note that Tapper is using the example of Palestinian incitement to ask whether people are being inconsistent in minimizing political rhetoric in the El Paso shooting. But Palestinian advocates blinded by a hatred for Israel are not sober viewers.

U.S. Rep. Rashida Tlaib, D-Mich., accused Tapper of “[c]omparing Palestinian human rights activists to terrorist white nationalists,” and dismissing it as a lie. It is a lie, Tapper replied, because that’s not at all what he said. 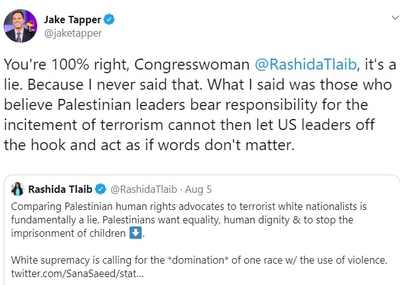 He invoked a dead Israeli girl in a pizzeria – if Tlaib wants to argue the suicide bomber was a “human rights advocate,” let her do it on the House floor.

“Tapper distorted the violence in El Paso by invoking occupied Palestinians and Arabs out of nowhere and comparing them to the white nationalist shooter,” an MPower Change statement said. “… By inserting Palestinians and Arabs in a conversation about white supremacist violence, Tapper pushed the Islamophobic ‘terrorist’ narrative about Muslims and Arabs that’s been mainstreamed over the past few decades.”

It’s not the first misguided run Sarsour has made at Tapper. When he criticized her and others in the national Women’s March for praising fugitive cop-killer Assata Shakur in 2017, Sarsour accused Tapper of being part of the “alt-right.”

Again, Tapper’s question after El Paso challenged the Trump administration and its supporters – those Sarsour, Tlaib, JVP all oppose – to consider whether their rhetoric might have been a factor in a self-professed white nationalist’s terrorist attack. But they couldn’t see that because he dared mention Palestinian incitement.

We have taken note of the blind hate Islamists and their allies have for Israel, showing how it drives them to make insane comparisons between Israel’s army and ISIS and blacklisting Muslims who support Palestinian nationalism but aren’t sufficiently rabid in their criticism of Israel.

This campaign isn’t going anywhere. But it’s another clear example of how those who claim to combat hate have plenty of their own demons to wrestle.