Leaders of American Islamist groups celebrated Eid al-Fitr, the end of Ramadan, this week by heaping praise on Recep Tayyip Erdogan, the president of Turkey who aims to be a leader of the Sunni world.

“[P]rofound human rights violations against hundreds of thousands of people” in Turkey were identified in 2018 by the United Nations High Commissioner for Human Rights, “from arbitrary deprivation of the right to work and to freedom of movement, to torture and other ill-treatment, arbitrary detentions and infringements of the rights to freedom of association and expression.””Over 100,000 websites were reportedly blocked” during the previous year, it found, and hundreds of journalists were arrested. Roughly 100 pregnant women and new mothers were detained because their husbands allegedly had terrorism connections.

“Some were detained with their children and others violently separated from them,” said High Commissioner Zeid Ra’ad Al Hussein. “This is simply outrageous, utterly cruel, and surely cannot have anything whatsoever to do with making the country safer.”

But to the American Islamists who met online Sunday afternoon, Erdogan is a beacon of goodness.

“Actually no matter what we say, it is not enough to express to President Erdogan what he has done not only for the Muslim people around the globe, but also that he has exemplified the true Islamic spirit here,” said Oussama Jammal, secretary general of the U.S. Council of Muslim Organizations, which hosted the Eid event.

“We would like to wish the president and the people of Turkey Eid Mubarak,” said Nihad Awad, executive director of the Council on American-Islamic Relations (CAIR). “May Allah accept from them, from their leadership and their support for the Muslim world, especially in the people in Palestine, in Libya anywhere.”

Awad has met with Erdogan and traveled to Turkey repeatedly, praising its “democracy and the rule of law” in 2016. 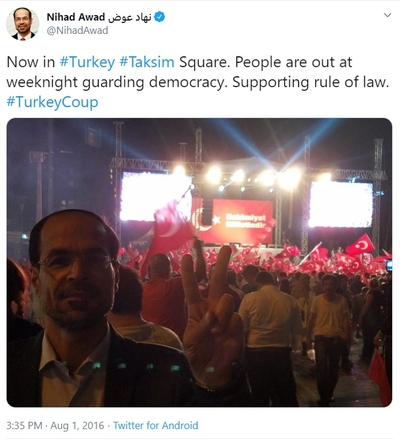 His organization, CAIR, was formed as part of a Hamas-support network established by the Muslim Brotherhood in America. Awad is listed in a Palestine Committee telephone directory. One Palestine Committee report described the group’s mission as “defending the Islamic cause in Palestine and support for the emerging movement, the Hamas Movement.”

Esam Omeish, former president of the Muslim American Society – another group created by Muslim Brotherhood members – and a board member at northern Virginia’s Dar al-Hijrah Mosque, uttered similar praise during the Eid celebration.

“And on this occasion, joining with the president of Turkey, we would like to wish the Turkish people also a blessed Eid and thank president Erdogan for his leadership and for his service,” Omeish said. “… Also as a Libyan American, I am very proud and very grateful for the continuous support that Turkey has provided for my home country where they have supported a democracy and the rule of law.”

But under Erdogan, Turkey engages in the kind of behavior that the same Islamists would condemns if done by other world leaders.

It denies a genocide committed a century ago, which left an estimated 1.5 million Armenians dead.

It has occupied foreign land since 1974. “Only Turkey recognizes the self-proclaimed Turkish Republic of Northern Cyprus as legitimate,” CNN reported last year. “… in the eyes of the world the TRNC is a country that does not exist.”

Turkey is involved militarily in numerous foreign conflicts, including Syria in Libya. “Turkey faces the risk of the ‘Gazafication’ in a “long stretch of Syrian territory along its southern border that hosts nearly four million people, most of them Sunni Arabs, a report by the European Council on Foreign Relations said. That means “the emergence of a militarily controlled territory that is perennially poverty-stricken and unstable.”

But the mutual affection is understandable, when put in the context offered earlier this month by Al-Monitor columnist Semih Idiz.

“Erdogan stands close to the Brotherhood and is providing strong political support and shelter for its beleaguered members,” he wrote. “Turkey’s intervention in Libya promises to prevent further losses by the Brotherhood in the region.”

That includes providing refuge to Hamas members, who use Turkey as a base to plot terrorist attacks inside Israel. “We will keep on supporting our brothers in Palestine,” Erdogan said during a December meeting with Hamas leader Ismail Haniyeh.

A leading critic, Dilara Koyurga, was placed in house arrest Wednesday, for seven-year-old social media posts deemed insulting to Erdogan. Koyurga was 17 when she wrote them.

In March, Erdogan enhanced his status as one of the “world’s worst jailers of journalists” when seven Turkish journalists were arrested for reporting on an intelligence officer’s death in Libya. They face a minimum of eight years in prison if convicted.

The committee also reports that “Turkey has taken hundreds of people into police custody for ‘provocative’ social media posts about the pandemic … and police have either taken into custody or summoned for questioning at least eight journalists about their coronavirus stories or tweets in March.”

More than 100 news outlets have been shut down.

American Islamists know these facts. Yet they do not seem to change their view of the authoritarian Islamist leader.

In his taped remarks to the USCMO, Erdogan showed why.

Along with talk about the coronavirus pandemic, Erdogan made a point of criticizing Israel in language that could be construed as threatening.

“We will not allow the Palestinian lands to be offered to anyone else,” Erdogan said, referring to a possible Israeli annexation of some West Bank settlements. “I would like to reiterate that Al Quds Al Sharif [Jerusalem], the holy site of three religions and out first kiblah, is a red line for all Muslims in the world.”

If he stands against Israel, and stands for the Brotherhood, it seems there is no abuse Erdogan can carry out that will shake his American Islamist support.