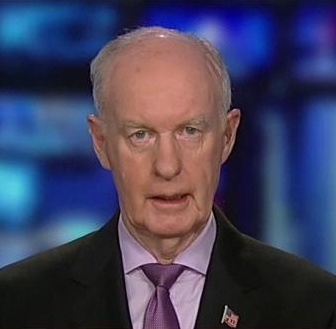 Lt Gen Thomas McInerney USAF Retired was the former Assistant Vice Chief of the USAF and Director of the Defense Performance Review reporting directly to SEC DEF and the Vice President when he retired after 35 years active duty in 1994. He had 4 tours in Vietnam starting in 1963,67,68,&69 initially as a FAC and then introducing the new F4Ds and the F4Es into Combat. He was the Air Attache’ to the UK and then Vice Commander of a F111 Wing in the UK followed by Wing Commander at Clark Field,then Commander of the 313th AD on Okinawa followed by DCS/Ops Intel at PACAF HQ and then Commander of Third AF in the UK thence Vice CINC USAFE in Germany followed by Commander Alaskan Air Command,Alaska NORAD REGION and Alaskan Command.

In retirement he was President of BENS and then Chairman YottaStor as well as being a Fox News Military Analyst since 9/11.