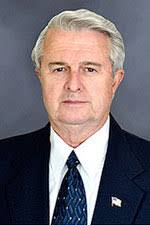 Colonel Richard F. (“Dick”) Brauer Jr. USAF, (Ret) amassed 5,200 hours of worldwide flying, attaining the aeronautical rating of Master Navigator. His tours of flying duty and deployments include Southeast Asia/Vietnam (1967-68), Europe, Central and South America (1968- 1971) and Australia (1971-1973), where he represented the USAF and the United States as an Exchange Officer, flying as an instructor in the Royal Australian Air Force (RAAF).

Following his Pentagon tour he was selected to be the 12th Commandant of the United States Air Force Special Operations School (Hurlburt Field, FL) and served the joint SOF, conventional and interagency communities in that education leadership position from 1986 until his retirement in 1991, having completed 26 years of active duty military service. In 2010 Colonel Brauer was inducted into the Air Commando Hall of Fame.