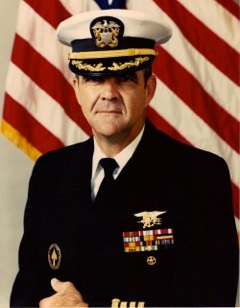 Captain Larry Bailey, a native of Marshall, TX, and a graduate of Stephen F. Austin State College, spent almost 27 years as a U.S. Navy SEAL. Obtaining his commission from Navy Officer Candidate School in 1962, he was first assigned to the destroyer USS LEARY before receiving orders to Underwater Demolition Team training in Little Creek, VA. After a year in UDT-22, he was assigned to SEAL Team TWO, where he spent almost five years and with whom he participated in the Dominican Republic invasion and deployed to Vietnam, where he led one of the first two East Coast SEAL platoons into combat.

Included in Captain Bailey’s duty stations were the Philippines, Panama, Bolivia, and Scotland. He commanded Naval Special Warfare Center (BUDS), where all SEALs are trained, for three years and retired in 1990 from the U.S. Special Operations Command in Tampa, FL.

Since his retirement, Captain Bailey has been involved in issues of national policy and was a founder of Gathering of Eagles in 2007. He has also been co-chairman of Special Operations Speaks, an organization that speaks out on defense-related issues, particularly those involving special operations forces. He and his wife Judy live in Chocowinity, NC, and are the parents of two adult children.